Chick-fil-A and Marriage Equality and The Bible 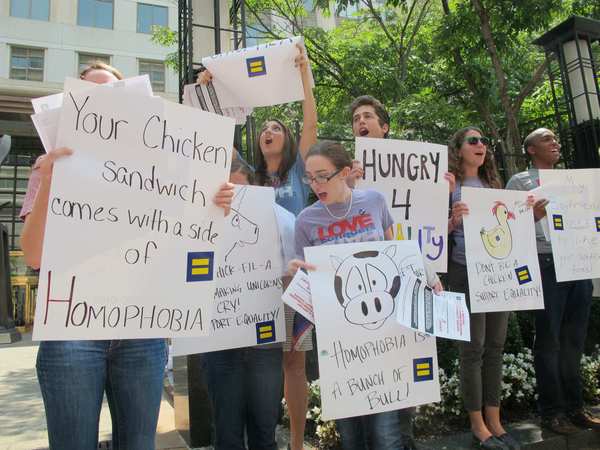 If you use any sort of social media or read news online, you’ll have likely heard about chicken restaurant Chick-fil-A’s statement of their position against marriage equality.  Because of their statement, their product has become a political statement of sorts almost overnight.

Well today huge crowds showed up at Chick-fil-A locations either to protest or show their support of the restaurant’s discriminatory stance after former president candidate Mike Huckabee dubbed August first “Chick-fil-A Appreciation Day” after their anti-marriage equality stance was announced.

I ran across several posts on Facebook and other social media sites today that are both inspiring and saddening. One such photo displayed a Chick-fil-A product with a caption mentioning something about God’s wrath.  In all honesty, it feels pretty ridiculous to me, but it nonetheless goes to show the substantial amount of discrimination and bigotry still around in this country.

In an effort to put things in perspective, I feel it necessary to share some of the other laws and guidelines set forth in the Bible.  Perhaps soon an ice cream shop will come out in support of stoning disobedient children to death.

Thanks to several websites, here are some of the prohibited items or actions:

There are also quite a few things expressly allowed in various books of the Bible: (from Liberator.net)

Slavery – Exodus 21 outlines the laws for ownership and trading of slaves.  A man could sell his daughter to pay off a debt.  You could beat your slave, almost to the point of death.  Foreign slaves could be kept forever and willed to your descendants, whereas Hebrew slaves could only be kept for a maximum of seven years, although there were exceptions to this policy.  Most of the faithful men of old had slaves.

Incest – For those of you who will not want to believe this, here are the words of Abraham himself:  ‘”Besides she is indeed my sister, the daughter of my father but not the daughter of my mother; and she became my wife.”‘ (Genesis 20:12)  So, Abraham and Sarah were half siblings, as well as a married couple. And let’s not forget righteous Lot, who knocked up both of his daughters.  By the way, doesn’t it seem a little strange that God would outlaw incest, and then create a situation where incest is mandatory?  Adam and Eve’s children and Noah’s grandchildren had no choice but to marry their siblings and cousins.

Genocide – In Dueteronomy chapter 7, God commands the Isrealites to ‘utterly destroy’ seven nations that were greater and mightier than they were.  Joshua says that they did exactly as commanded.  According to Joshua’s census, the Isrealites numbered approximately 2.5 million.  So, if the Bible is to be believed, the Hebrews extinquished seven nations numbering more than 17.5 million persons.

As well, there were several incidental holocausts along the way, such as the Midianites.  In this case, the meek Moses became upset because the Israelites killed only the men, allowing the women and children to live.  So, they went back and finished the job.  When God commanded the Israelites to destroy the Amalekites (1 Samuel 15), he told them to kill, not only the men, women, and infants, but even the animals.

Based on these boasts, Jehovah makes Hitler look like a small time thug.

Polygamy – This one doesn’t even require much backup.  The list of faithful men of old who had multiple wives is virtually endless – Abraham, Isaac, Jacob, David, and many, many more.  In addition to taking multiple wives, most of these men also took concubines, which are basically mistresses.  This leads me into the next category.

Fornication – Most moral codes frown on this, but not the Bible. Numerous faithful men of old had concubines.  Many of them impregnated their slaves.  Lot, who was married, had sex with his daughters.  Judah and Samson hired prostitutes.

Now, it seems to me that the Bible says, “Thou shalt not commit adultery”.  But, for some reason, this does not appear to include having multiple wives, keeping mistresses, visiting prostitutes, having your run of the slave girls, or selling your wife/sister to another man at a profit.  So, how do you break this command?

Murder – Now, to be fair, the Bible does outlaw murder.  However, it doesn’t seem to enforce the penalty evenly.  Moses killed an Egyptian, and Samson killed thirty innocent people, so that he could steal their clothes.  Both of these men retained God’s approval and blessing.

I think knowledge is probably the most helpful tool against bigotry and hatred.  Above all, I would urge people to remember the fight for marriage equality is still going on.  Certainly, a restaurant chain’s declaration of discrimination is disheartening, but this shouldn’t distract us from continuing to push for equality where it really matters, Washington.

Update: For those out there who insist upon “Biblical Marriage,” I found this infographic.